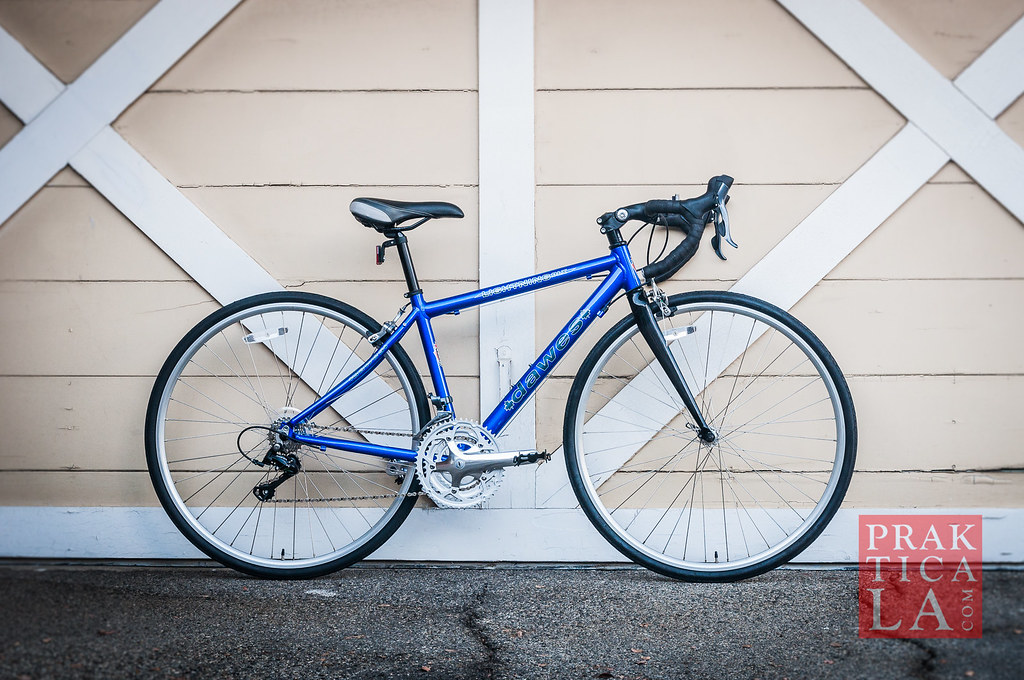 My current ride is a legit Motobecane LeChampion CF, but not every cyclist is serious enough (yet) to drop a grand (or more) on a bike. The very cool Poseidon bike, which I reviewed here, is one alternative. (EDIT: I’ve also reviewed the Poseidon Triton, their updated road bike.)

I recently obtained an even more affordable bike, the Dawes Lightning DLX. While not flashy by any means, this solid road bike provides excellent bang for buck as either a casual ride or an entry into the world of road biking. Read the full Dawes Lightning DLX review below! 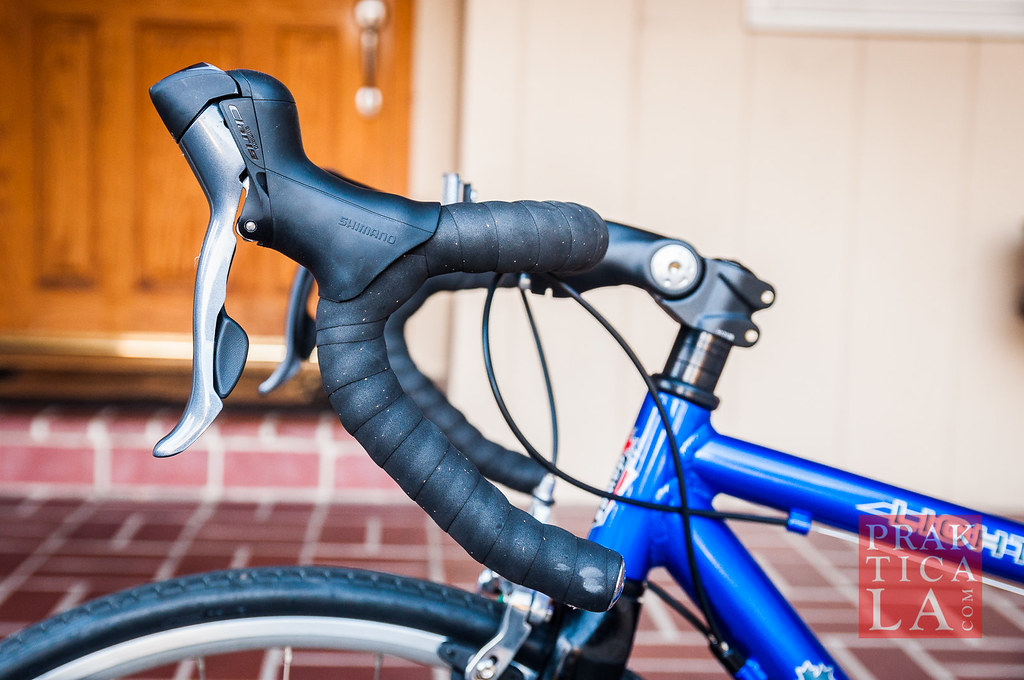 Dawes bikes are sold by Bikes Direct, who primarily retails house brands like Dawes, Mercier, and Motobecane. Since almost all bike frames are made by the same people anyway, the customer trades off brand recognition for super low prices and formidable components. (You also have to do some minor assembly yourself.)

Pretty much anything you get at Bikes Direct will be miles ahead of any bike from Target, Walmart, etc.

This Dawes Lightning DLX was acquired from Bike Island, Bikes Direct’s closeout site, who retails blemished and/or old inventory. (The product page always notes the exact condition.)  While Bike Island’s selection is more limited, the prices there are even lower than on Bikes Direct!

It is worthwhile to note that I could not detect ANY blemishes or faults on the Dawes Lightning DLX that I received! 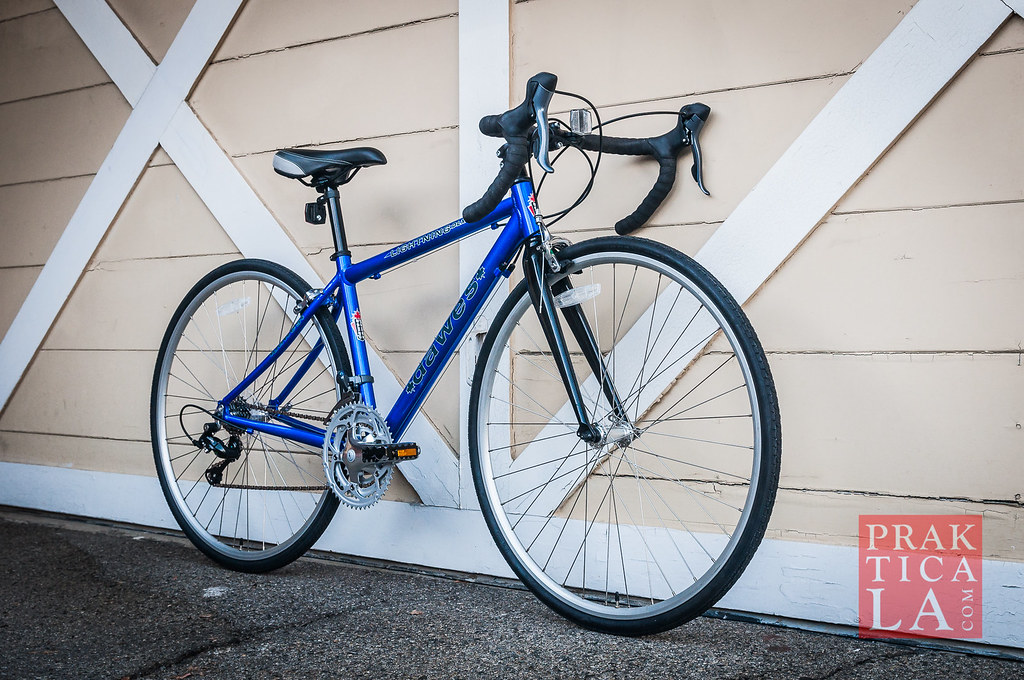 The Dawes Lightning DLX stands out (or rather, doesn’t) due to its “Plain Jane” appearance. The blue paint job and decal work more than suffice, but they don’t grab attention. This may actually be a good thing if you don’t want unscrupulous thieves jacking your bike.

The wide, chunky welds lack subtlety, although this has no impact on functionality. (See the Poseidon bike for an example of very smooth aluminum welds.)

As long as you can get over the rather pedestrian appearance, the bike is actually really solid and well-built, with way-above-average components for its price.

Indeed, the Dawes Lightning DLX scores most of its points in components department. It starts with a standard, no-frills aluminum frame, but adds a carbon fiber fork (!), which is totally bananas at this price. (You’ll notice me saying that a lot.) 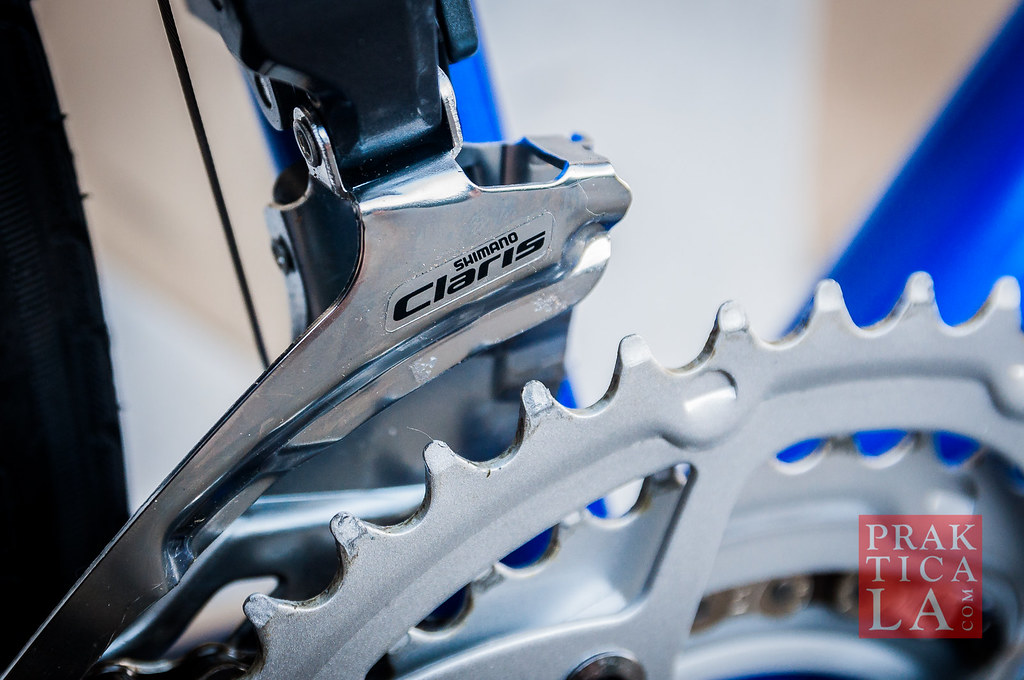 The product specs list the bike as having some random “Microshift” front derailleur and brakes/shifters, but – surprise – they arrived as Shimano Claris, which is even better! This puts the primary groupset components on the same level as the Poseidon bike, but at an even lower list price. Not only that, the rear derailleur is an upgraded 8-speed Sora!

The cranks are attached to a triple chainring – not my favorite (I prefer a simpler compact), but it does provide you a wider range of gearing for climbs, for a total of 24 gears. Beginning riders may find three rings somewhat complicated, but after some practice, shifting should become second nature. 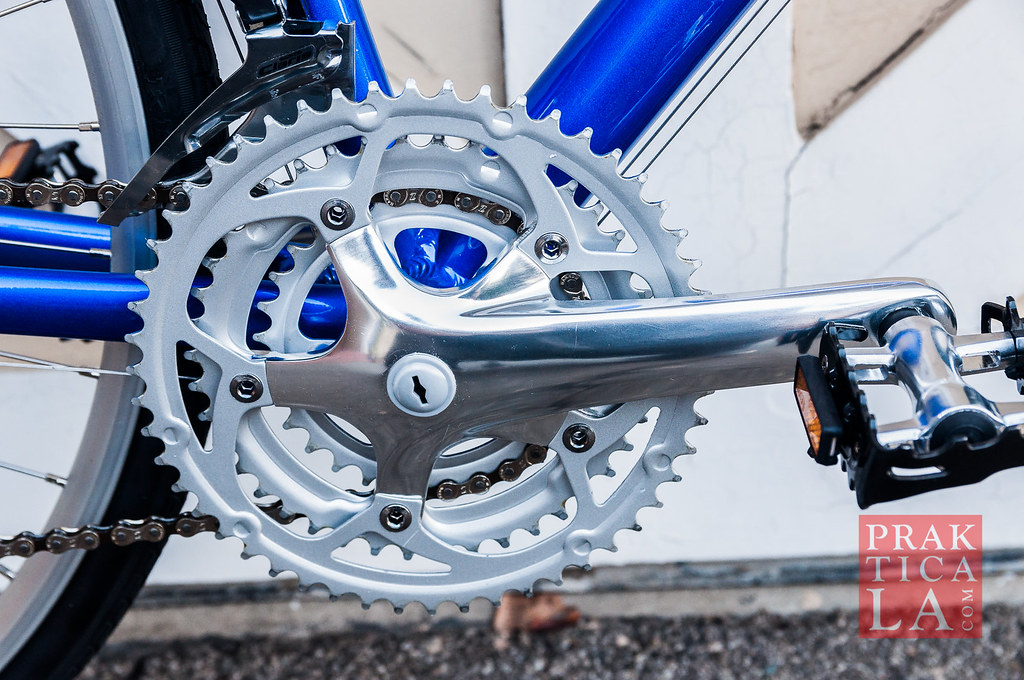 Also nifty: the stem is adjustable, so you can fiddle with the height to best fit your riding position.

The rest of the components are pretty standard for an entry-level road bike. The seat, wheels, tires (700x25c), quick-release skewers, and so on are totally serviceable.

I took the Dawes Lightning DLX for a spin and was honestly surprised by how comfortable and smooth the ride was. Shifting gears is a snap using the Claris STI shifters, which integrate the gear shifters with the brake levers – typically an expensive component.

Braking was adequate. As with on most entry-level bikes, I would eventually ditch the stock rubber brake pads and replace them with metal-backed pads, like these pads from Kool Stop. They are inexpensive, long-lasting, and improve stopping power considerably.

For leisurely city riding and moderate road cycling, a bike like this is perfect. It will even work for more intense riding, albeit without the super-smooth shifting of higher-end groupsets or the ultra light weight of a carbon frame. Of course, those will tack an extra grand or two onto the price… 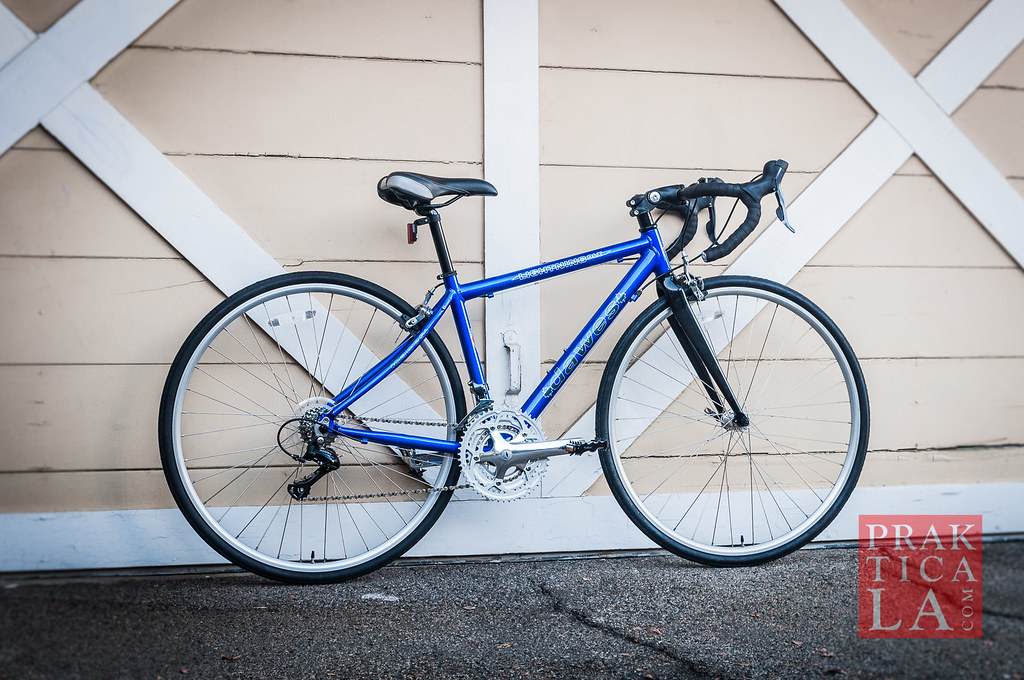 This is the minimum level of road bike I recommend for purchase. Anything lower, and you will most likely want to upgrade if you continue riding.

Normally, this threshold hovers between the $500-$1,000 price range (see the Poseidon bike). The Dawes Lightning DLX is even cheaper than that. And it’s EVEN CHEAPER if you can snag it (or its equivalent) from Bike Island.

For casual riding, this bike has everything you need. For more intensive biking with steeper climbs that require more power, better components and/or lighter frames provide incremental (but certainly not critical) advantages. 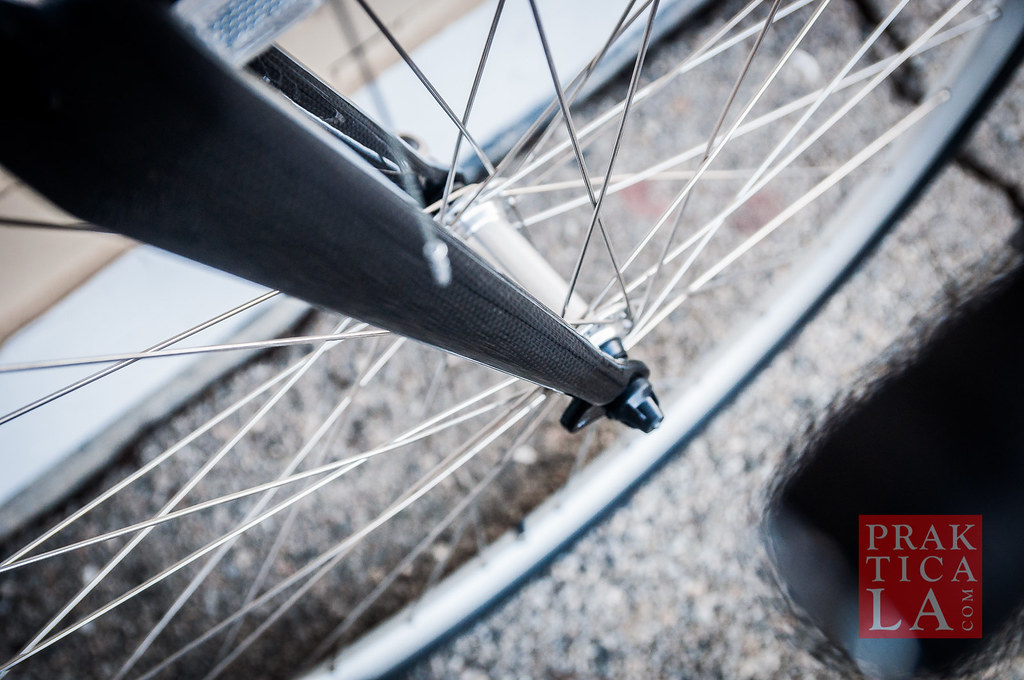 Bottom line: If you’re starting out as a road biker and aren’t the type who needs to show off your hardware, this is probably the best deal you’re going to find anywhere.

Check out the Dawes Lightning DLX inventory at Bikes Direct here. Don’t forget to check Bikes Island frequently for any closeouts too!

If you must look badass, check out my Poseidon bike review here. (EDIT: Our Poseidon Triton road bike review is also available here.)

Have you ridden the Dawes Lightning DLX or something similar? Share your experience in the comments below!