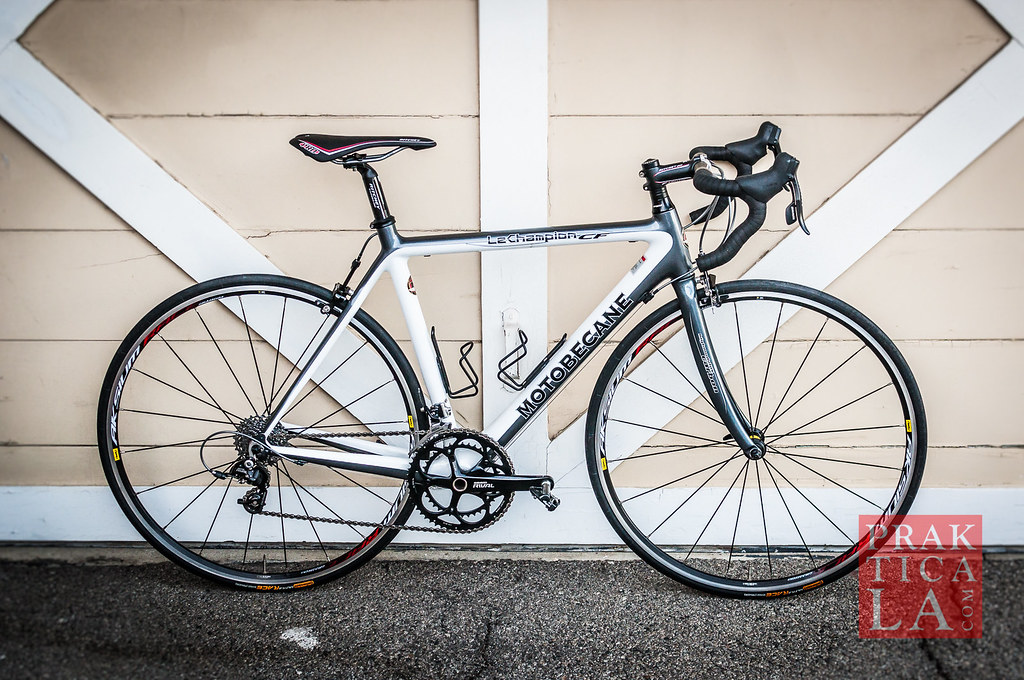 Decent road bikes are expensive, especially brand name ones. Industry secret: bike frames, regardless of brand, are almost all manufactured by the same one or two companies in Taiwan.

A company called Kinesis manufactures frames for well-known brands like Trek, Diamondback, GT, K2, and Felt (one of my favorites). Guess what – they make the house-brand frames for Bikes Direct, an online only bike retailer. 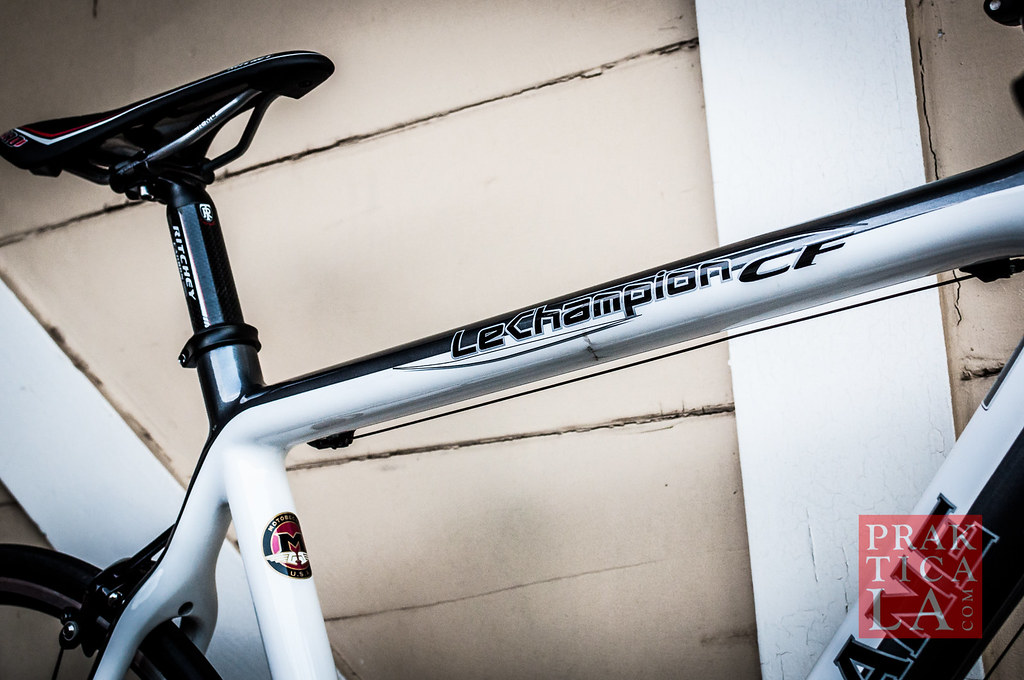 While they occasionally sell recognizable names like Fuji and Kestrel, the bulk of Bikes Direct’s inventory are house-brands like Motobecane, Galaxy, and Mercier. They operate on low enough costs to blow out entire bikes for prices you’d normally pay for components alone. They also ship for free to the continental US!

I assume they do this by ditching brand-name premiums, leaving final assembly and customization to the consumer, cutting out middlemen, and selling in volume. At any rate, you’d be hard pressed to find a similarly-equipped bike for anywhere near their prices.

The Motobecane Le Champion CF’s appearance is entirely inoffensive. It’s a standard semi-compact monocoque frame, made from one continuous piece of carbon fiber, accompanied by a carbon fork. 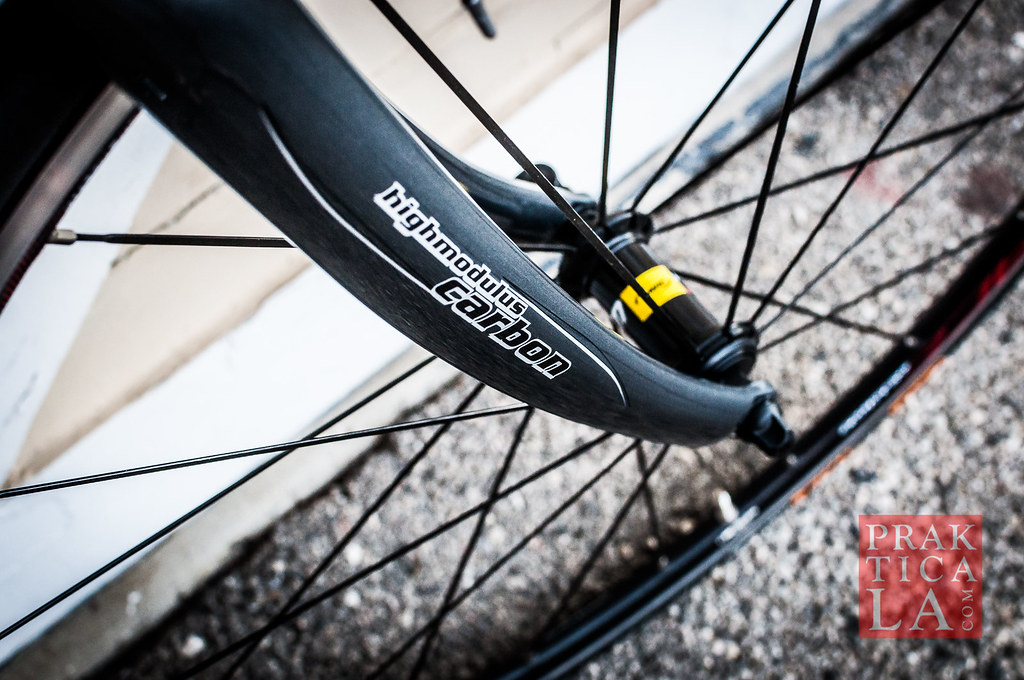 While the geometry looks less than aggressive, I do like the paint job, which has a nice metallic finish. I could have done with more simplistic decal work, though.

Overall, the Le Champ’s looks are serviceable, if not particularly memorable. Thankfully, the big-name components plastered all over the bike contribute to its legit-ness. 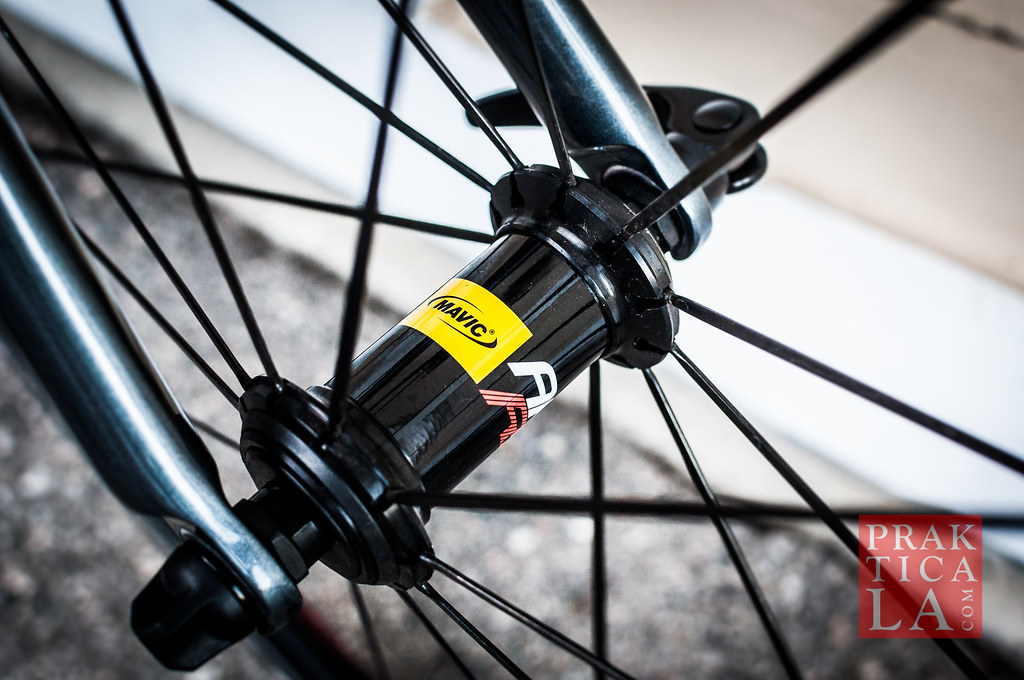 If you bought a $500 road bike at a brick-and-mortar store, you’d mostly likely be getting an aluminum frame with an alloy fork, no-name wheels and brakes, and non-STI shifters (there are some exceptions). A $500 Motobecane, on the other hand, can get you carbon forks, decent wheels and brakes, and at least a Shimano STI groupset, like Claris. 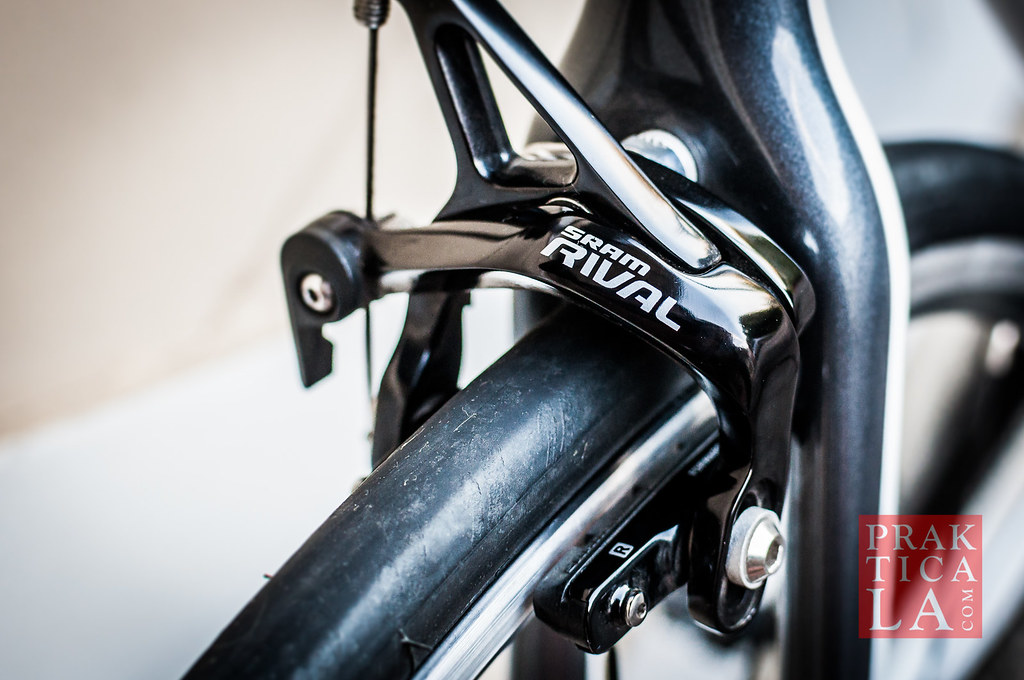 You get the entire Rival groupset too, not just the shifters or derailleurs. Retailers will often advertise one high-end component (like shifters) but downgrade the other parts to lower-end or no-name components. The Le Champion’s complete SRAM groupset includes Rival shifters, derailleurs, cassette, brakes, and cranks. Super legit. 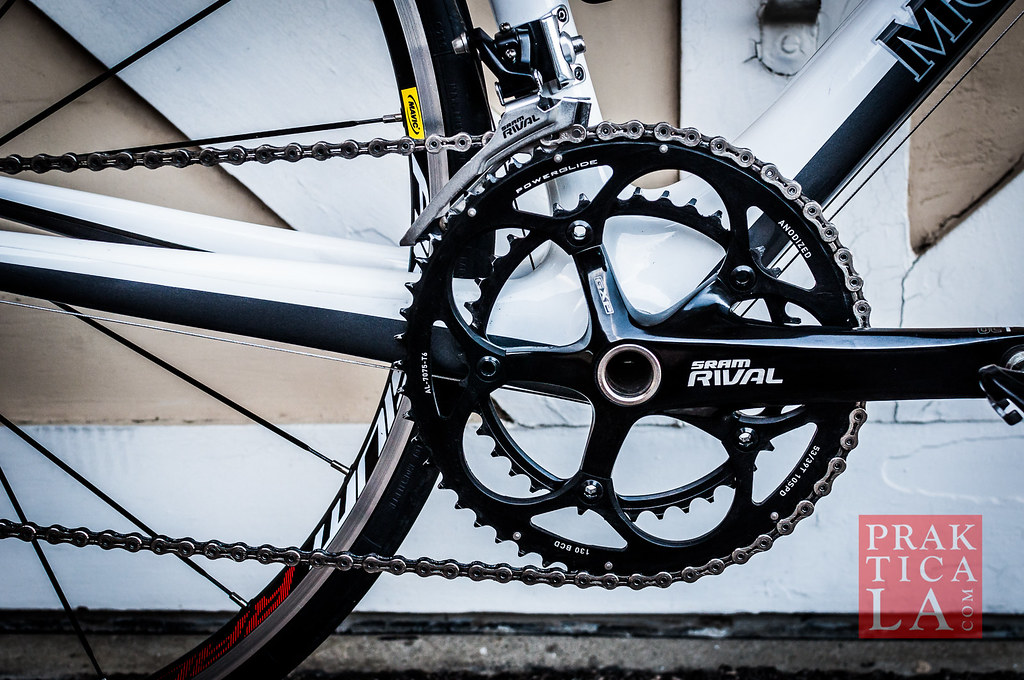 The lightweight Rival groupset from SRAM is comparable to Shimano 105 or Ultegra. I’ve ridden both Shimano and SRAM, and prefer SRAM slightly over its competitor because of its “double-tap” shifters, which use the same lever for both upshifting and downshifting (the left lever controlling the front derailleur and the right lever controlling the rear). 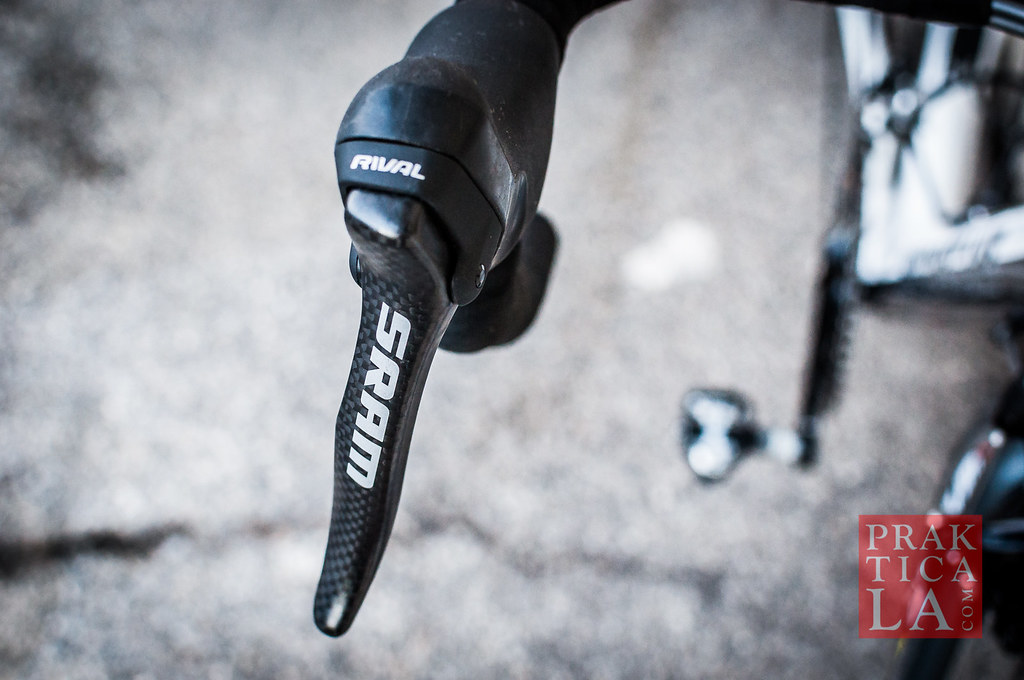 With a full SRAM 2×10 Rival groupset (20 gears total, although newer Rival groupsets have 22 gears), you know the Le Champ will run smoothly and reliably for a long time.

One caveat: the Wellgo clipless pedals that came with this bike were abysmal. Eventually I replaced them with some Look-style pedals from Nashbar and now I am happy camper. Most bikes don’t even come with pedals anyway, so no big deal. But don’t even bother with this Wellgo crap.

Bikes Direct ships their bikes about 80% assembled. You can pay a bike shop to do it for you, or if you are handy you can do it yourself, as long as you have some basic tools like a Phillips screwdriver and some hex keys.

Although assembling the handlebars, seat, and post are relatively straightforward, truing the wheels or adjusting the derailleurs require some level of expertise. Thankfully, there are plenty of online tutorials and YouTube videos to refer to if you decide to DIY it. But if you’re not a bike pro it will definitely take a lot of trial and error before getting everything to feel and sound just right.

Ideal situation: you have a bike pro friend whom you can mooch from who is willing to assemble and fit the bike for you, for free. But seriously, how embarrassing.

It took me a lot of readjustment before I could really enjoy riding the Motobecane Le Champion CF. In fact, after I first assembled it, riding it felt slow and awkward. I was worried that I had just dropped a huge chunk of cash on a bike that wasn’t even comfortable or fun to ride. 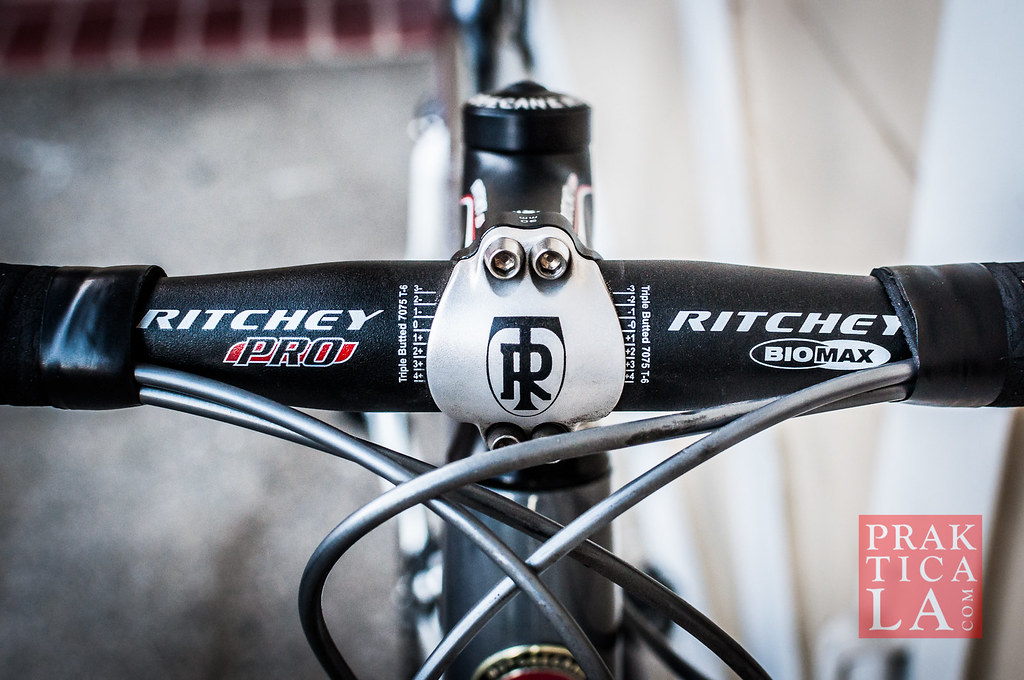 After doing a ton of research on bike fitting, I made further adjustments to the reach, seat height, derailleurs, and pretty much everything else that could be adjusted. When I got back in the saddle, it felt like a completely different bike! Soon I was rocketing past other riders with ease. 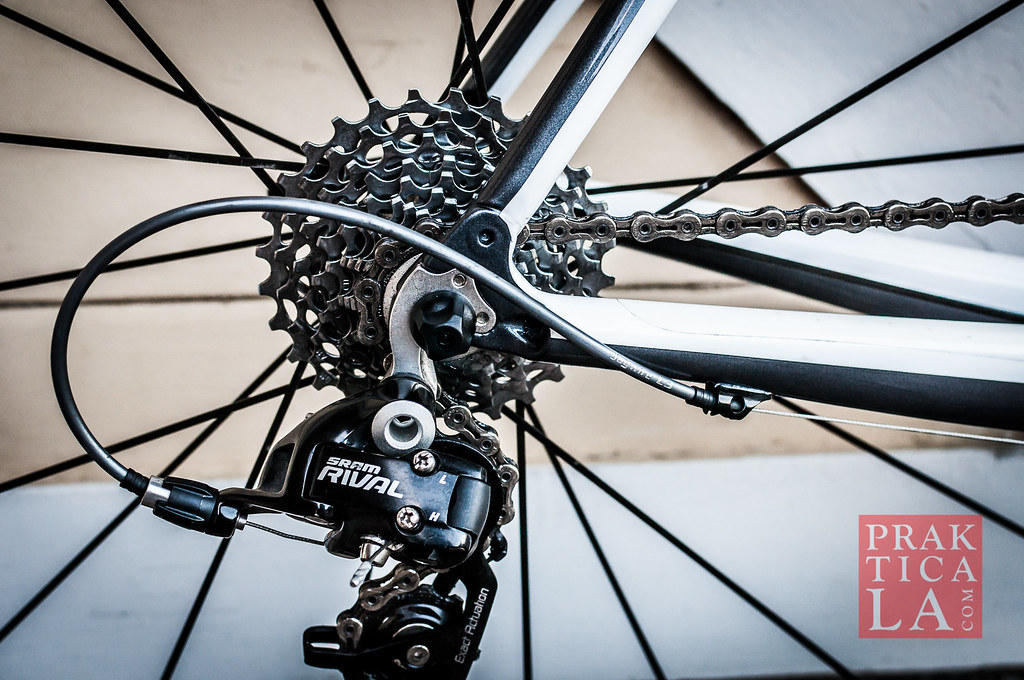 Even now I’ve never had the bike professionally fitted, so I still make occasional minor adjustments if I feel something isn’t quite right. But for the most part, I am very happy with how the bike rides. I’ve put many miles on it and it still feels great – in fact, it keeps getting better as I continue to fine-tune it. 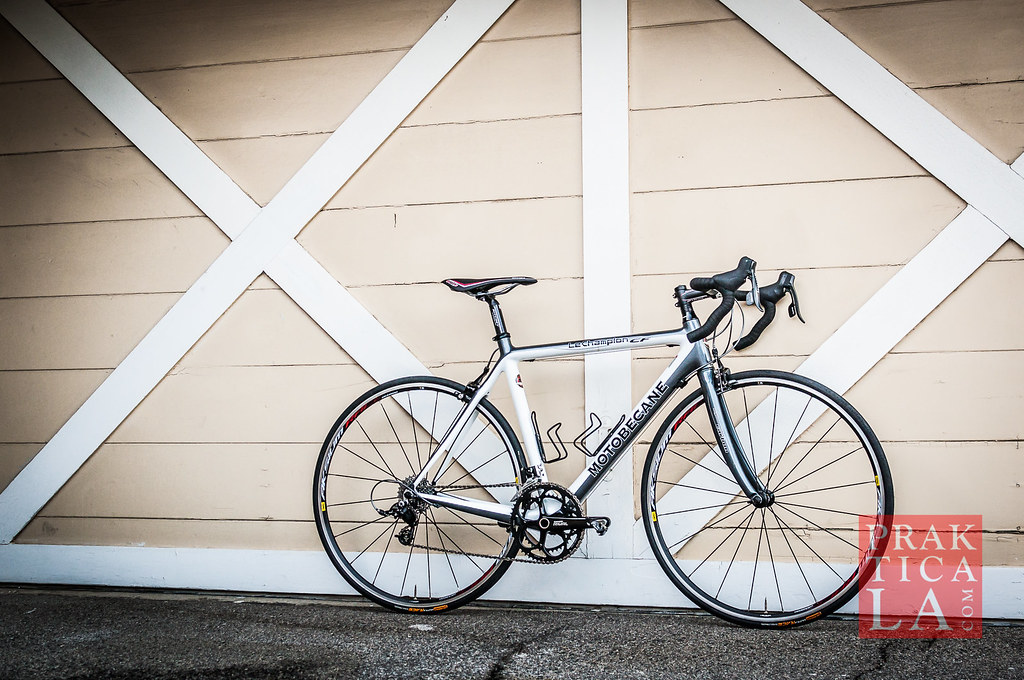 PROS: Amazing value. High-quality product and crazy low price for the level of components. Free shipping and no tax in most states.

CONS: Average-looking. House brand offers no bragging rights (if you care about that kind of thing). Requires some self-assembly and adjustment, which can be complicated for the inexperienced. TERRIBLE pedals (easy and cheap replacement).

The perfect candidate for a Motobecane is the budget-conscious layperson who DIYs everything and doesn’t care about looking cool. Bikes Direct gives you maximum value for your dollar, and you get to satisfy your itch for tinkering. It’s also a great way to for beginners to learn about bikes from top to bottom.

If you’re looking for something more slick-looking, check out my Poseidon Bike 4.0 review. (EDIT: Our review of the Poseidon Triton, their updated road bike, is now available here.) Easily in the sub-$1K range, it has respectable components and looks good to boot. It’s also available at brick-and-mortar retailers, who can fully assemble the bike and do a professional fitting for you. 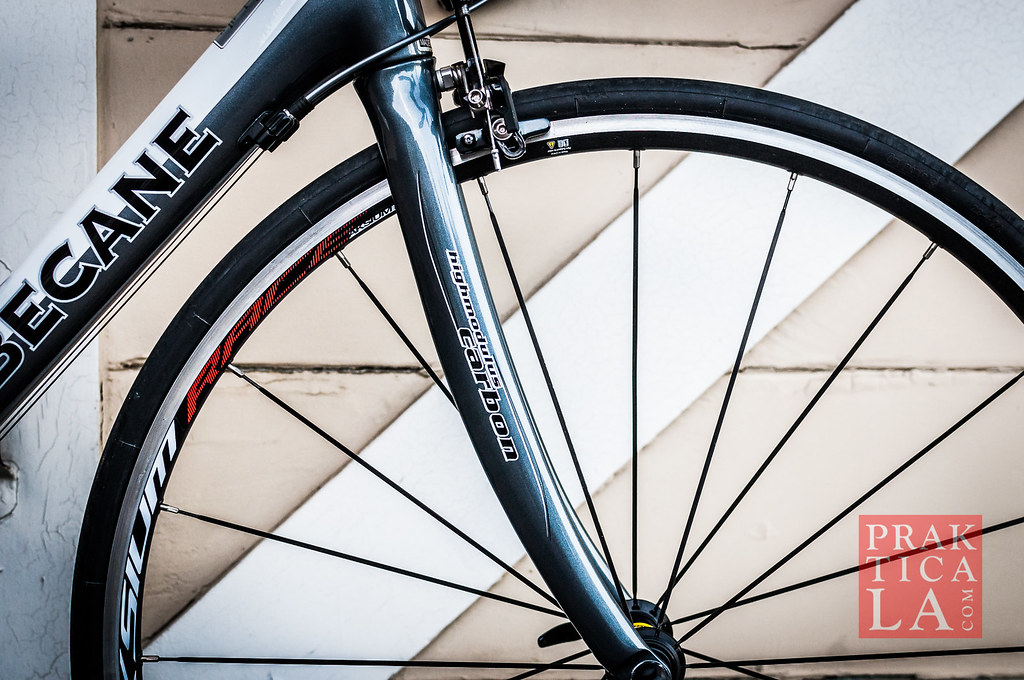 Interested in a Motobecane or any other bike from Bikes Direct? If you’ve ridden one yourself, we’d like to hear from you as well. Leave a question or comment below!